What is Solar Feed In Tariff ? Why it is important for the customers? | Cyanergy 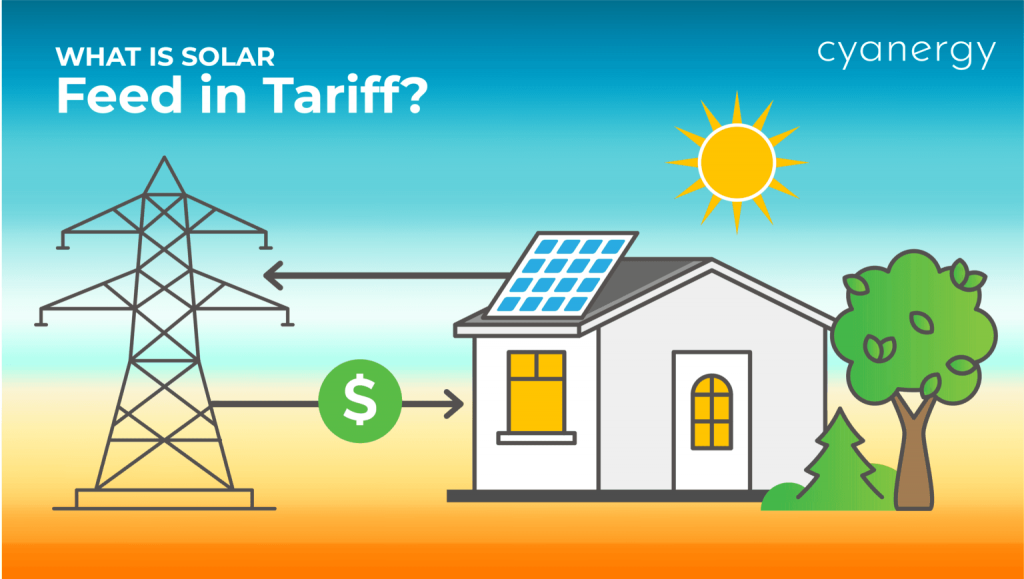 03 Jul What is Solar Feed In Tariff ? Why it is important for the customers?

Solar feed-in tariff is a fiscal policy designed to promote the use of renewable energy sources. Solar users can earn from it. This in-depth article covered a lot on solar feed-in-tariff.

What is Solar Feed-In-Tariff?

When a house installs a PV solar panel, a utility meter which measures the power supply of your home is also connected to the panel. Since the connection of the main electric supply happens through the grid, this utility meter can also access to the installed solar power.

Therefore, when the solar system produces more power than the demand, the extra power is sent back to the grid using this meter. The retailer will then pay you back the credit on the electric bill which then can be used at night or when the sunlight is absent. This is called a “Solar Feed-in-tariff” or “buyback rate.”

The rate of the feed-in-tariff is fixed per kW/h exported and you will be paid accordingly. You won’t receive the payment in a cash, but rather you will see the credit being added in your regular electric bill. Besides, you also have to speak to your retailer for this option to be implemented to you.

Is Feed-In-Tariff same as state rebate?

When you install a system, bear in mind that feed-in-tariff is not as same as any rebate. The rebate denotes to the amount that the government pays as per scheme which adds a discount to the upfront cost of the whole installation system, and it can be worth thousands of dollars, whereas the feed-in-tariff will only pay you for the extra energy your system produces.

Initially, there are two types of Feed-In-Tariff available in Australia and they are as follows:

1. Net Feed-in-tariff:  This tariff will get you the payment for every kW/h electric energy your solar system sends to the grid after your regular usage. If no energy is transferred to the grid, then you need to pay the bill incurred as a result of the regular electric bill.

What it generally means is that when your solar power system produces electricity, it firstly supplies the power to your homes and then if there a surplus energy is left, it will then be transferred to the grid for which you will be provided with credit. Your net solar meter will usually measure the amount of electricity your property uses, as well as the amount of excess electricity your system has sent back to the grid for FiT to be applied.

2. Gross Feed-in-tariff: Although this is not applicable to the new connections, you will receive the payment as a credit for all the energy you send to the grid generated by your solar system. In this case, you have to pay for the electric bill that you use from the grid the same as other non-solar users. Your gross generation meter will measure the electricity that has been sent to the grid whereas, your consumption meter will take hold of the amount of power that you have taken out of the grid for your own usage.

Should the clients go for the Grid metering or Net metering?

Back in 2016, having gross metering was advantageous to the users who used to get a decent amount of payment worth around 60c/kWh. This was the sole reason why the inhabitants of NSW preferred to keep its gross FiT system instead of switching into net FiT. They would probably change it to net metering system should the grid electricity rates surpass the usual Solar Feed-In-Tariff rate.

However, in recent days, the FiT rate has substantially dropped down to only 7-16c/kWh in most of the places in Australia. On top of that, if you plan to send all your produced energy back to the grid with a hope to get a large sum of payment, then you will be undoubtedly wrong. Because the rate of the grid-based electricity has gone up, and you have to lose more money in importing electricity from the grid rather than earning from sending it to the grid.

Therefore, it’s worth using the net metering system which will ensure a power supply first to the doorstep of your property, and then to the grid if there is any left.

Who are eligible to receive Feed-In-tariff?

According to Section 40F of the Electricity Industry Act 2000,

1. Any solar PV systems that are installed on a household, school, community organisation or small businesses.

2. Solar PV systems that are connected to the grid within the National Energy Market (NEM)

For the first one, FiT not only applies to solar, but also to energy generators, such as wind, hydro, and biomass systems of less than 100 kWh. The energy system has to be linked with the energy distribution system, and it has to generate the electricity. Therefore, by definition, a solar hot water system cannot be eligible under this criterion since it doesn’t produce any electricity.

Talking about solar feed-in-tariff, another type of FiT sneaks in, and it is called premium feed-in-tariff. This special type of FiT was introduced by the Victorian Government to the Victorian customers on the 1st of November 2009. This scheme was closed at the end of 2011. According to the condition of this scheme, any households, small businesses and community organisations with a small-scale solar system of 5 kWh or less will be credited at least 60c/kWh for sending any surplus energy produced by the systems to the grid.

Although this scheme ended in 2011, the eligible customers can still receive the benefit of this scheme with its constant rate until 2024. However, apart from the criteria mentioned above, there are few exceptions to these criteria for which you will be forfeited to access to this scheme and they are:

However, you will still be eligible for the premium feed-in-tariff if you replace the damaged solar panels (due to storm, fire damage), renovate or demolish your house, and switch to another electrical distributor other than the existing one provided that, the house owner has to pay the closure fees if there is any as per contract.

Why Feed-In-Tariff is important for the customers?

The rise of the usage of the solar panel does commensurate with the perilous increase of the electricity bill in Australia. Hence, it is not unusual for the solar retailers across Australia to offer an enormous amount of incentives, as well as various affordable deals, to subside the costs of the overall system. One such example is the existence of feed-in-tariff. An upward trend in the electricity price along with an egregious effect of global warming due to an increase in the accumulation of carbon dioxide has led to an increase in the usage of solar energy, and so is the number of rebates, including FiT. The benefits of receiving FiT are associated with the improvement in the industry level, economical level, and environmental level.

1. Feed-in-tariff encourages the occupants to switch more into a renewable form of energy. The conventional electricity is produced from coal or gas or fuel, and it accounts for at least 39% of the total amount of your regular electric bill. You can easily save this amount if you care to join the solar energy scheme. On top of that, if you manage to get FiT, then you can save a lot of money by taking advantage of the shorter payback time which refers to a time required to recover the cost of the solar system.

2. The dependency on the usage of fossil fuel imported from the foreign countries gets less as Australia’s own robust solar energy suffices the need of the energy required by its people. Therefore, it saves an incredible amount of money from being splurged in the economic sector of Australia. Feed-in-tariff increases the chance of installing more solar energy to make this change to happen.

3. Feed-in-tariff makes the people remain vigilant against any excess use of their electricity. On the one hand, they tend to use as the exact amount of energy as they require, and then send back the excess energy generated by their system to get a decent rate of FiT. On the other hand, some of the users use less energy to ensure that their power doesn’t fall short at the time of natural calamity or during the load-shedding.

4. Solar energy is free from any hazardous pollution, including carbon emissions. Neither does this system advocate the release of any harmful chemicals, nor does this system involve the use of natural energy sources such as coal and gas. The installation of one solar panel can eradicate around 178 tons of carbon dioxide over a span of 30 years which is equivalent to 10 football fields covered with trees. This system also protects our mother earth from a depletion of ozone layers, as well as global warming. Feed-in-tariff promotes the installation of the solar system, which then helps to revive the ecosystem of our dear planet.

5. Solar business can also solve the problem of job redundancy, faced by many unemployed people. If you don’t confine yourself to the branded retailers only, but rather if you go for the local retailers to install your solar system, that boosts up the local economy by offering jobs to many people. The solar energy retailers provide decent salaries to its employees, and you can contribute to aid that facility. Feed-in-tariff provided by the local retailers helps more customers to install the solar panel and hence, creating more job opportunities.

6. FiT accelerates both decentralizations, as well as diversification. Decentralizations allow a secure and safe electric connection without being hampered by a malfunction or impairment in the centralised electric power system. Therefore, it increases the compliance of the local inhabitants to their core solar power installations. Diversification ensures that the supply of the electricity paces with the demand in the local market, including the fuel source as well.

However, the concept of the solar feed-in tariff is not that easy when it comes to implementing it nationwide. There are various rates of FiT available both in terms of state and distributor wise. To know more about how the FiT rate varies from state to distributor wise, then click here to see through how they change every year and how they apply to each and every state in Australia.