How Many Types Of Solar Inverter, What Are They? | Cyanergy 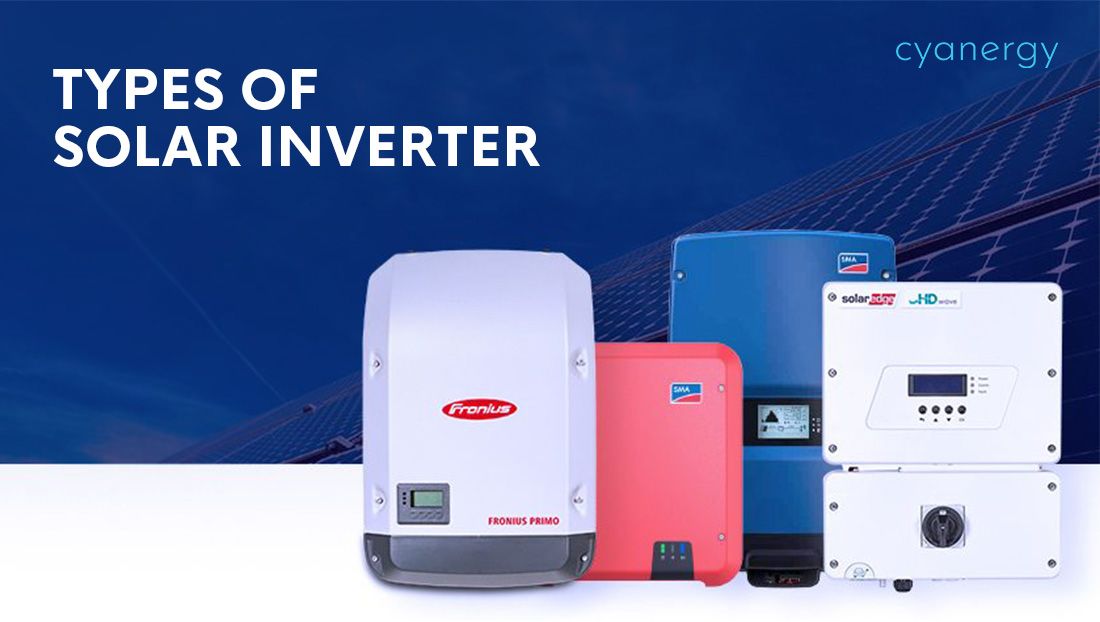 17 Aug How Many Types Of Solar Inverter, What Are They?

An inverter is mainly used to transform the DC electricity into AC, which is the main type of power that is used by most of the residential appliances and electrical devices. An inverter is considered as one of the most vital elements of the entire solar system since it determines how much energy is about to be sent to the houses or the commercial industries, and how they help the users measure the self-consumption of the overall electric power. There are many types of solar inverter available in the market depending on what kind of solar panels you are using in your properties. Furthermore, an inverter is essential because this is more likely to malfunction due to its continuous use of making solar energy into its convenient form.

There are mainly five types of solar inverter, and they are as follow;

String Inverters: As the name suggests, multiples strings originating from the solar panels are attached to the inverters, and the DC electricity produced in them are then transformed into AC current. A solar system located on a roof doesn’t require more than one or a maximum of two string inverters. They are cheaper than other types of inverters and kept in the closer proximity of fuse box and electricity meter. The problem with this kind of inverter is that if one panel is obstructed with shading, the remaining panels will be sabotaged too, and the efficiency will go down to a significant amount- besides, less scope to expand the solar panels for the future. This type of inverters is the main type of solar inverter for home.

2. Microinverters: Never to confuse it with a power optimizer. Whereas power optimizer tends to send the collected power into a central inverter to convert DC to AC electricity, microinverters installed for each panel tend to optimize each panel’s power in a module-level. So, the transformation of the DC current to AC happens in each inverter connected to each panel. Therefore, shading on one panel will not impinge upon the other panels, result in less variation or no compromise of the optimum efficiency. Alongside the commercial use, microinverters are chosen as the best solar inverter for home as well. Although they used to be expensive in the past, their prices have recently gone down to a reasonable level.

3. Hybrid Solar Inverters: This is a multi-mode inverter which involves a battery installation along with the set-up of the inverters. Not only does the inverter supply the DC power to the battery, but also it provides power to the grid and your home’s appliances in the form AC current. Having equipped with MPPT, it can track the amount of charge your battery requires, and when it’s the right time to draw the charge from the grid for a low price. When the battery is fully charged, the excess power can be sent back to the grid using this charge controller. Should any problem arise, this inverter can go to a standby mode instead of the turning off completely.

4. Central Inverter: It resembles the string inverter, but instead of putting the strings of panels in the inverter, it joints all of the strings of panels together and inserts it into a combiner box which is kept in a protected territory. Afterwards, the strings are then connected to an inverter which receives the DC electricity from the combiner box and then converts it to AC. Since the inverter involves using only a combiner box and a pad, its installation cost is very less. Besides, it is less vulnerable to any physical or natural damage since it’s kept in a protected area, which is free from any harsh weather. Since they have more capacity compared with string and microinverter, they are mostly used in large-scale properties.

5. Battery-based Inverter/Charger: Most of the off-grid solar systems tend to charge the battery on its own, but during winter or acute shading, it is often difficult for the solar system to fully charge the battery. Hence, the inverter/charger kicks in to meet the energy requirement of the system. This type of inverter is bi-directional, which means that it can work both as a battery charger and an inverter. In this system, an AC generator is required to trigger the conversion of the AC electricity to DC and vice versa.

This type of inverter can be off-grid, grid-tied, or grid-interactive.
With the help of the inverter/charger, AC power from the generator is converted into DC to feed the battery, whereas the DC is converted into AC to supply the continuous power of the critical loads.

However, like UL1741 inverter/charger, when there is an outage in the grid-tied system, the users too will see the impact of the blackout as this inverter/charger will de-power to stop generating the power by using the anti-islanding technique. An “Islanding” means when an inverter generates power in the case of a grid outage.

You can also check out our blogs on Fronius, Huawei, and Sungrow inverters. However, not all the brands contain all types of solar inverter within their genre. Cyanergy ensures that you get to choose the suitable inverters according to the requirement of the solar system. If you need our assistance for getting the right inverter, feel free to contact us or comment below.

Let us secure your solar investment & do the heavy lifting for you. A dedicated solar designer is waiting to answer your queries. Let him reach to you.

To Get A Obligation Free Solar Quote, Just Fill Up the Form & Submit. We will Reach You Shortly

Not only inverter, but you also deserve the best solar system, right?
All solar queries & Cautions in a knot. Don’t Invest in solar until you read this solar beginner guide.