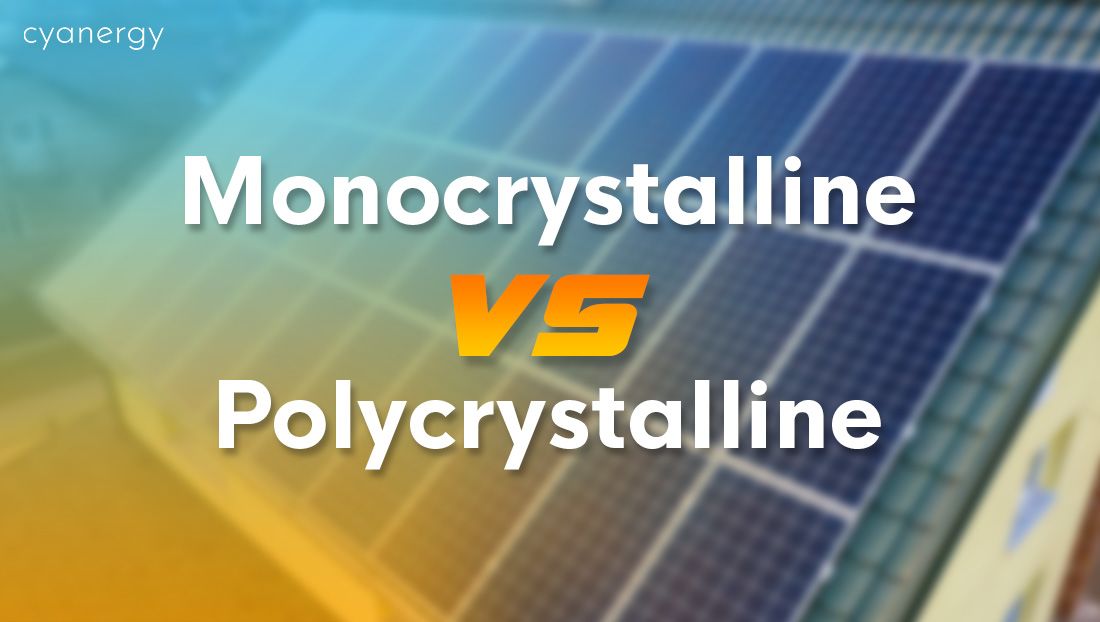 Solar panel is one of the most fundamental infrastructures of the whole solar system. The way a car cannot start off its engine without the supply of the premium quality filtered fuel, likewise, a solar system cannot function adequately unless the solar panel is aptly chosen. The reason solar panels should be carefully chosen, because it ensures a better supply of the electricity produced from the solar system; hence the most efficiency. However, the debate always kicks in when it comes to choosing monocrystalline vs polycrystalline solar panels. You will be delighted that our company, Cyanergy, will provide you a prudent advice regarding which panel to choose for your property without being biased.

A solar panel system is very important because the sunlight energy absorbed by it then gets converted into an efficient form of electric energy. The efficiency rate from the converted energy turns out less than half of the absorbed energy, which is between 15% to 22%. Therefore, a dull solar panel can reduce the efficiency level below 15% and thus sabotages the main purpose of the installation of the solar energy system.

What does High efficiency mean?

Why confusion with tier 1 products

Most of you contemplating to install a solar system at your property always remain in a dilemma whether you should opt for mono or polycrystalline solar panels. Even the retailers tend to hoodwink you by praising the type of solar panels they sell on to you whilst debunking the benefit of another type. Sometimes, the retailers set a higher price for the solar panels just to make you believe that their products are tier 1, and the pricey solar panels mean top-notch products, but that’s not the case. Tier 1 products are mainly referred to as “bankability” which means when a manufacturer is financially able to supply you with high-end solar panels.

A financially stable manufacturer indeed tends to provide quintessential tier 1 solar panel, but some of the products are not up to the mark nor recognised by the solar industry. Before buying the solar panels, always make sure that you mustn’t buy any solar panels which’s brand is obscure with little familiarity in Australia, and the brand, which is well recognised, but has never been suggested by the accredited installers due to its safety hazards.

The solar panels are made from silicon, a semiconductor, which works both as a conductor when the temperature increases, and an insulator when the temperature is zero due to the alignment of the electrons. The reason silicon is used, because it is the second most abundant element in the world, as well as vastly experimented and manipulated, for the research and advancement of the solar industry.

Monocrystalline solar panels are made from the solar cells in which each cell is bred from the pure single silicon crystal. They are dark black, and the shape of each panel is square with the missing corner on each side. This solar cell is moulded from the molten silicon extracted from the quartz crucible. Due to its conspicuous shape, it tends to be more efficient and temperature friendly because the atomic structure in the single pure silicon crystal causes less friction to the electrons to flow spontaneously.

The monocrystalline solar cells are sliced into wafers from a solid crystal silicon ingot. These wafers are not compatible to pass the electricity through it, but rather it has to go through a series of purification and processing to finally fit underneath the anti-reflective tempered glass, contained inside a frame, to turn into a monocrystalline solar panel. The black colour of this solar cells makes them look appealing and distinctive.

The finished solar cells are then aligned and attached to form ribbons containing 10 cells in the length merged with 6 ribbons to finally make 60 cells of full solar panel.

The reason it is not kept as a square shape because it would waste large portions of silicon. Besides, the advancement of the recycling option makes the chopped-off slices of the silicon to be reused for manufacturing the polycrystalline solar panels in the future.

When heaps of silicon crystals are melted and poured into a square mould to solidify and turn them into an ingot like below, the wafers are then sliced from this ingot to make the polycrystalline structure.

Apart from these minor criteria, there aren’t any discrepancies between both solar panels. We, Cyanergy, sell all kinds of top-notch to standard tier 1 solar panels, including LG, Jinko, and Astronergy.

From the table, it is evident that the efficiency has turned out the same for both panels. The temperature coefficient denotes to the temperature in which the power flattens due to heating of the panel. Monocrystalline is ahead of polycrystalline panels by -0.02% which means that it drops less power than the poly panels for an increase per degree. However, the performance ratio is the main key factors to have a valid comparison as it is tested by the California Energy Commission instead of the manufacturer. Again, the performance ratio is the same for both panels.

Therefore, we reiterate that you can purchase and install any of these types of solar panels despite their trivial differences. It is worth avoiding any miscreants for not getting confused with covert and overt policies of the retailers. When you purchase and install the solar panels from an authentic brand, it ensures you a warranty of 12 years for materials and processing along with 25 years warranty for extra linear power output. Besides, they should last 30+ years immaculately. Cyanergy is committed to providing you with more information should you need any regarding monocrystalline and polycrystalline solar panels.

Let us secure your solar investment & do the heavy lifting for you. A dedicated solar designer is waiting to answer your queries. Let him reach to you.

To Get A Obligation Free Solar Quote, Just Fill Up the Form & Submit. We will Reach You Shortly