Astronergy, as a subsidiary company of the Chint Group, is one of the most recent and largest solar-based companies in the world, committed to contributing for the establishment of the solar industry both in China and many countries in the world. Having initially founded for the development and expansion of the solar businesses in terms of PV power generation, as well as module production, the company currently has shaped the view of the solar industry by manufacturing some of the high-end solar equipment and that too in an affordable price.

Astronergy on the verge of the competition with other contemporary solar manufacturers has proved that they are not lagging in terms of fulfilling the sheer demand of the solar industry.

Astronergy has been in the production of solar panels since 2006 with little acquaintance and made a remarkable stride over the years in reaching the capacity of manufacturing over 2.5 gigawatts of solar modules along with a running capacity of over 4 gigawatts of solar power stations alone. Astronergy was established in China in 2006 and gradually evolved their businesses by building their manufacturing facilities in Thailand and Vietnam alongside China. Although their solar businesses in China got ample recognition, they became more active as soon as they started to produce solar plants in countries like Thailand, Spain, USA, Japan, South Africa, Bulgaria, Romania, India, and Australia.

Astronergy stepped into Australian’s solar businesses since 2009, and with the help of the local distributors, the company didn’t have to look back again since their integrated team’s devotion and perseverance tickled down to the success of their venture. To amplify the business a bit more, the company set up its own distributors in Australia in 2017 and aided the partnership with a local developer in South Australia to create a massive-scale solar farm.

The company already had two solar farms down the process which were of 1MWdc and 1.8MWdc but expected to see another massive production of 150MWdc solar farms in Australia by 2019. Out of all the distributors, we, Cyanergy, is one of the locally appointed distributors to sell their products to our long-term clients.

In 2019, the Astronergy also partnered with Clean Energy Regulator (CER) to participate in the solar panel validation program to ensure that they can serve the warranty for the faulty products, prohibit the grey products, and help speed up the attainment of the various government’s incentives to the respective clients in Australia. Astronergy’s office is located in Kent Town, Adelaide, and currently recognised as “CHINT Solar instead of Astronergy. Cyanergy can help you get their products, including solar panels only if you apply for the Cyanergy’s quote.

Astronergy is delegated to supply tier 1 solar products, including solar panels by Bloomberg in 2016 since Bloomberg New Energy Finance Corporation was the innovator of this special yardstick of measuring the solar panel’s financial stability. When a retailer sells a solar product, especially solar panels, it becomes imperative that the product belongs to tier 1 category.

Tier 1 doesn’t necessarily refer to the highest standard product which will not expire or degrade from any malfunction, but rather it measures the “bankable” condition of the solar equipment. It means when a solar manufacturer has the financial consistency on which the financial companies can rely on in terms of lending money to utilize their products without having any disquiet. Since Astronergy solar panels received the crown of selling the tier 1 products, it means that they are trustworthy in the solar industry.

Besides, Light-induced degradation aka LID happens to take place immediately for the next few months, after an installation at a rate of 2-3% followed by 0.5-0.7% for the remaining years. Therefore, having a longer performance warranty ensures that your solar panels won’t get impaired overnight. For this, the Astronergy’s attempt to offer a 30-year performance warranty is a boon for the solar industry.

Astronergy has secured a lot of accolades, including the awards for the world’s first LeTID certification issued by TUV Rhine of Germany and the highest AAA level of operation and maintenance in the solar industry. Not to mention that the latest 2020 PV module scorecard, led by PVEL, an independent solar panel testing organisation (which was a part of DNVGL, a Norwegian organisation), cited the Astronergy as the top performer for making their solar panels unique and reliable.

This test is done based on four reliability factors, such as Thermal Cycling, Damp Heat, Dynamic Mechanical Load, and Potential Induced Degradation; hence Astronergy showed its standalone performance by passing all of the tests with credibility.

It seems apt that the solar panel’s ability to prevent the degradation and the formidable application of lasting longer has made Astronergy to obtain the top performer’s crown in various years, such as 2014, 2017, 2018, and 2020. This seemed possible only because the company has allowed the independent organisations to delve into their process of making such iconic solar modules and their persistent exercising of deep-dive due diligence method. Therefore, installing Astronergy’s cost-effective unique solar panels is worth every penny. 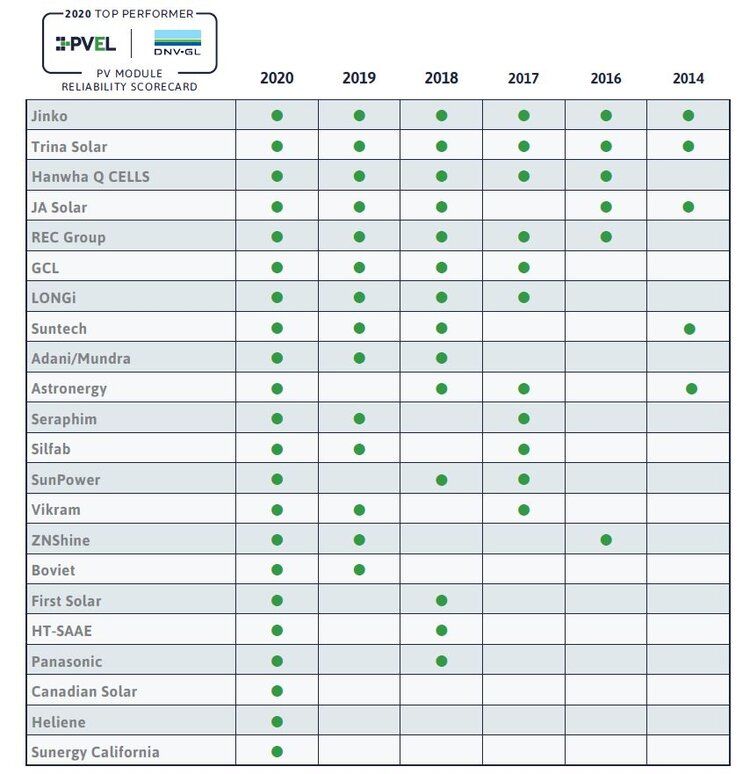 Summary table of the latest results from the 2020 PVEL PV module reliability scorecard.

A lot of world-class leading solar panel manufacturers strive hard to make the solar cells used in the panels look alike in terms of their colour and appearances, but they go in vain most of the time. Unlike those companies, Astronergy has proved it right by spending hours and hours in crafting those solar cells and matching the colours so that the solar panels look ravishingly appealing. Thanks to Astronergy for giving such blissful solar panels.

There are 4 sub-categories of Astronergy solar panel and they are;

AstroSemi and AstroTwins are the most tangible examples of the Astronergy solar panels that are bestowed upon with all the modern features to increase the efficiency of your solar panels by a large amount.

AstroSemi: AstroSemi solar panel uses either 120 or 144 solar cells in lieu of traditional 60 or 72 solar cells due to use of the half-cut (HC) technology. It is also dependent on the 9BB technology to increase light utilization by using the multiple round wire busbars. Busbars are important for diminishing the resistance inside the solar cells, divided by the two panels using the HC technology. Busbars are located in each solar cell from top to bottom to transmit the electric flow throughout the cells, and the more the busbars, the more the efficiency of the solar panels have. The traditional flat ribbon will make the panels susceptible to shading, resulting in subpar performance and more degradation.

On the contrary, the up-to-the-time multiple round wire busbars increase the efficiency and performance by decreasing the gaps found in the solar panels and hence provides a shorter distance to let the electricity flow spontaneously. The HC technology happens to shorten the wiring distance and thus causes less resistive losses. Therefore, more efficiency from the centre of the panels to either of the direction of the solar panels. One of such examples is 330W CHSM60(M).

This is a quintessential monocrystalline AstroSemi solar panel with a power range from 310W to 330W. It relies on both HC and multiple 9BB technologies to reduce the shading effect and increase the maximum efficiency by 20.0%. The temperature co-efficiency in which the power drops is -0.34, which is fairly good, and the performance output is 97% with very little or no degradation. According to the manufacturer, the maximum degradation after 25 years will halt at 80.20%, which is a remarkable quality. Cyanergy has all the curated collections of AstroSemi solar panels, including 330W solar panel system.

AstroTwins: AstroTwins tend to be monocrystalline solar panels and compatible with only 120 or 144 solar cells. Its main speciality is its double-glazing design and bi-facial technology that ensures the best quality solar panels in the whole series with low-cost functionality. The double-gazing (not to be confused with bi-facial features) option substitutes the conventional white EVA plastic back-sheet with a rear glass, which moulds a glass-to-glass sandwich. This, in turn, increases the stability of the structure of the panels since the glass is more stable, more resistant to UV degradation, and has more longevity.

The bi-facial feature adds more efficiency to the solar panels as the rear side of the panel comprises of a polymer back-sheet that allows the panel to reabsorb the reflected light along with the front side simultaneously. As a result, it increases the energy output by 27%. One of the typical examples is 370W CHSM60M(DG)/F-BH solar panels.

This tier 1 monocrystalline solar panel consists of 120 solar cells that are bi-facial and have double-glazing technology to protect the solar panels from water or other serious degradation. It ensures that the light passing through the rear panel doesn’t get wasted, but rather they can be reutilized by the rear polymer back sheet. This kind of solar panel has two types of efficiency, for example, the front side has 19.6%, and the backside has 13.7%. With a temperature co-efficiency of about -0.34 same as AstroSemi, this solar panel has more performance output which is 97.5%. Cyanergy can get this solar panel installed to your property should you wish to avail it.